Mazda’s Mono Ethylene-Glycol Operated Ejector Vacuum System eliminates the need for boilers and steam for your polyester plant, thereby drastically reducing running cost. You can recover the cost of the ejector system in as little as four months and the savings will continue for as long as the plant remains in service.

Find out how, below.

Mazda has now pioneered its ethylene-glycol operated vacuum systems. In the production of polyester polymers, the deisngs of such systems enable effective waste reduction and energy conservation in reactor service. The motive fluid (MEG) in these systems is ethylene glycol which in the reactor ejectors acts as process solvent.

How is this achieved?

Regular steam ejector systems based on ethylene glycol (the process solvent), cause steam condensate contamination. In addition to this, the end result of the polymer carryover from the process contaminates the initial stages of the ejector and leads to time-consuming shut downs for cleaning. The eradication of ejector fouling and effective solvent recovery and key factors in the design of Ethylene-Glycol Operated Ejector Vacuum Systems.

The process is simple – the use of process solvent as the motive fluid, the contamination of such steam condensate is eliminated by design. Secondly, due to the nature of MEG driven ejectors which operate at a higher temperature than conventional steam jet ejectors, the second problem of fouling of the units by polymer carryover is also reduced. An added benefit of such a system is that the process contamination (usual caused by the backstreaming of steam in conventional ejectors) is eliminated via the use of organic vapour. With these waste – reducing features of such a design, it is easy to see why such a system would be economically advantageous.

From an operational point of view, the energy requirements are automatically reduced because of the high boiling point requirement of this system which mean that the intercondensers operate at lower pressures than conventional vacuum systems. This has a threefold effect – lower cooling media requirements, condensate is eliminated and as mentioned above, the drastic savings in operational costs.

In addition to polymer dissolution and waste reduction there is an added benefit of longetivity and reliability of the design. The chances of corrosion and significantly reduced via the use of MEG jets.

Several industries benefit from all the advantages offered by this clever design. As a testimony to our design philosophy, Reliance industries recently installed Mazda’s Ethylene-Glycol Operated Ejector Vacuum Systems and stopped steam generation throughout their six polyester plants. This is all possible through Mazda’s state-of-the art R&D centre equipped with the latest technology and modern testing instruments.

Currently, Mazda is the only company in the world to virtually simulate identical site conditions for testing these ejectors for hassle-free installation at your plant.

Our system is highly efficient and very compact as compared to our closest German competitiors. 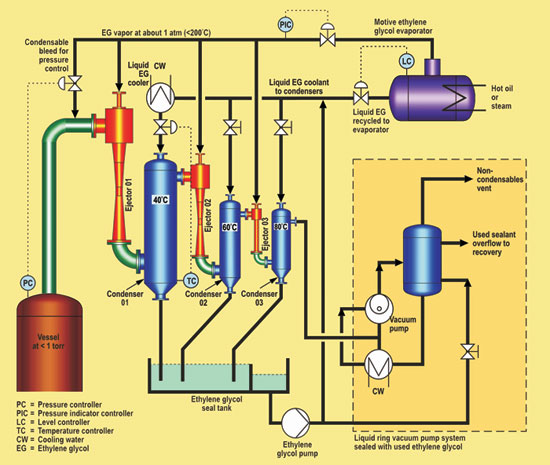